Do you want to know more about eToro’s top investor, Stephen Bliss and why he thinks that the future of blockchain is an extremely disruptive technology? 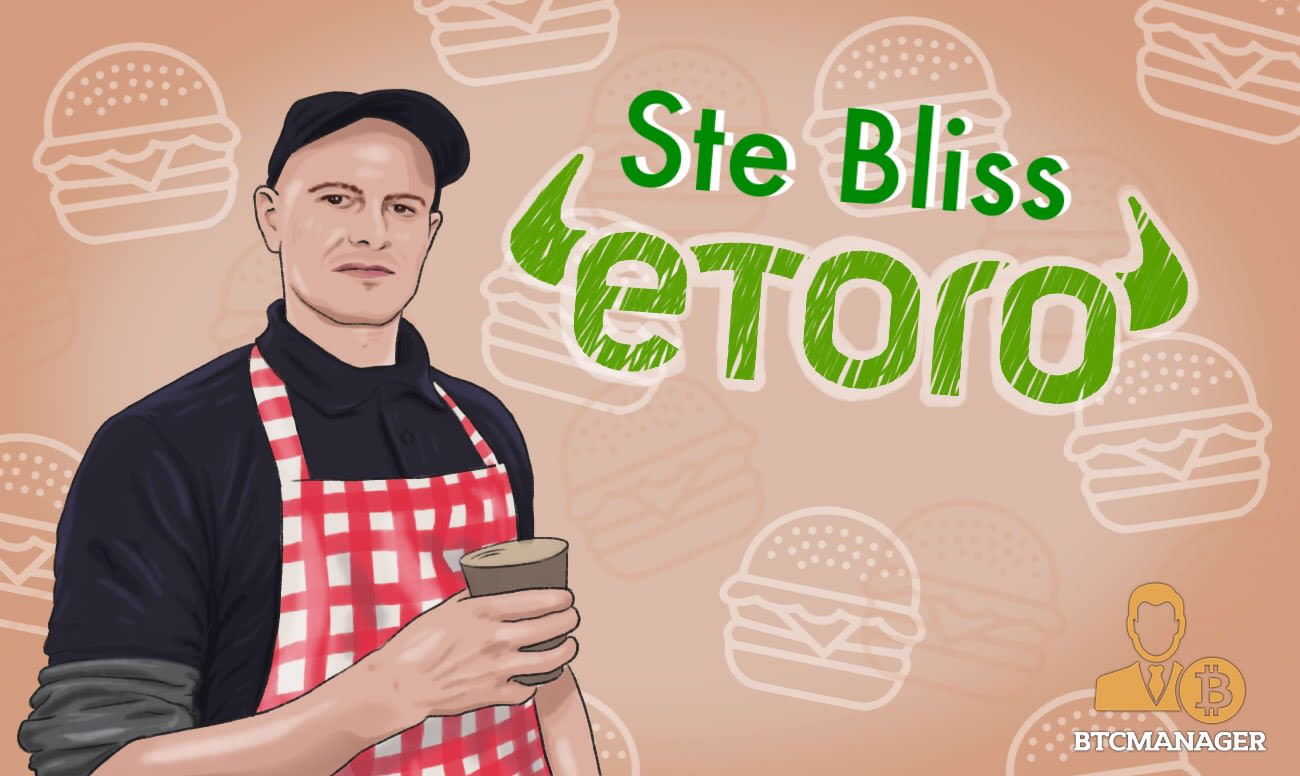 eToro has a unique and innovative platform where you are able to copy other successful traders and their portfolios.

The first social networking platform of its kind was first launched in January 2007 making it accessible to everyone around the world. More about eToro later.

But here’s the interesting thing

Stephen Bliss entered the world of trading in 2010. He’s a regular businessman who owned a mobile catering business.

Intrigued by eToro’s unique platform, he signed up for the free demo account that comes with $100,000 virtual money to practice trades and observed how the top traders became so successful.

After some time, he opened a trading account and started trading on his own.

Then, in 2017 he joined the Popular Investor Program and became known as ‘The burger Flipping eToro Popular Investor’, wildly popular amongst other traders, with the highest copies traders on the platform.

Stats of Stephen Bliss at eToro

Now, blockchain technology arrival in 2008 broke into the scenes and shook up the traditional financial sector, becoming enemy number one because of the potential surrounding it.

Blockchain technology has revolutionized the world of finance because of the distributed ledger technology and unlimited potential.

Stephen Bliss and many other famous people are blockchain proponents believe in the potential and how it is going to totally change the world of finance.

So, what is so compelling about trading at eToro?

Today, you will find over 1,200 assets including as many at 10 digital assets for purchasing and trading, which include the most popular cryptocurrencies including Bitcoin, Ethereum, Bitcoin Cash, Ethereum Classic, Dash, XRP, Litecoin, Stellar, NEO and EOS.

eToro has two unique and sophisticated tools that their 10 million registered users can take advantage of:

Here’s what Stephen Bliss has to say about his successful trading experience at eToro in the hopes that his knowledge will help encourage inexperienced users.

According to Bliss, what drew him to eToro’s platform in the first place was that it was different from the rest.

For him, it had a pretty simple user interface that is very easy to use.

He also says that it is one of the only places where you can buy stocks, crypto, forex, oil, gold and invest in copy funds and, in addition, copy other top traders all commission-free.

Another thing is that the eToro team together with Yoni Assia, founder and CEO, go the extra mile to ensure that users get the best possible user experience.

He has 100% trust in the team at eToro and explains that the platform over the years has improved.

He continued saying that it gives him a great sense of gratitude by helping people who come from all walks of life to grow their investment portfolios.

Some of the people are saving for a rainy day, retirement or buying a new vehicle or saving for a house deposit.

Many of whom were taught to save and put their money in high-street banks and saving accounts which generated interest which is peanuts.

He believes that the days are coming to an end as people want their money to work for them as banks continue to become stagnate with systems that are outdated.

The fact that people are learning and following his trading techniques and insights gives him great pleasure, just as it gave him when he joined the eToro popular investors and copied other top traders when he started trading nearly 10 years ago.

He believes that in the future crypto and blockchain will rapidly see a lot of institutional interest with blockchain and AI becoming the foundation for the fourth industrial revolution.

He visualizes a future where everything is decentralized and runs on blockchain including governments.

In his opinion, the digital tokens such Ethereum and EOS, are strong projects and are setting the foundations that have endless possibilities for decentralized applications with Bitcoin, the millennials’ gold.

Is that you too can become eToro’s top investor like ‘The Burger Flipping eToro Popular Investor’, Steve Bliss.

It doesn’t matter if you are new to trading because eToro offers you the chance to increase your portfolio and gain financial freedom.

You can start off slowly with eToro’s demo account and learn from other top investors until you gain confidence.

Once you’ve got it licked you will be ready to go, just like Steve.

eToro, the world’s no. 1 social trading investment broker offers a number of perks to help you make more informed trading decisions such as:

Bitcoin is back! It appreciated more than 100% against the US dollar and other cryptocurrencies have also followed suit thanks to the hype of Facebook’s Libra coin.

Recently, Bitcoin has crossed the psychological barrier of $10,000 hitting a high of $13,844.77 on June 7 and according to many crypto enthusiasts, it has become the ‘new gold’ as it starts to build momentum.

Steve Bliss’s trading success is inspirational and now that his secret is out you too can trade like a pro by simply mimicking his trades or any of the 8 million community members at eToro.

So, what are you waiting for?

Start your journey today with eToro. The future awaits!

Visit eToro Site
eToro is a multi-asset platform which offers both investing in stocks and cryptoassets, as well as trading CFDs.

Plus500 Support Now Available on WhatsApp